it’s what we do. gluttons for gluten. which will NOT be helping me get my abs back in time for the ‘grand pool opening weekend’ in may. guys, it’s FUNNN to eat. the hubby and i love to try out new local spots when we get the chance to “escape”. such an accurate word to use when referring to leaving your kids behind. who doesn’t love a good burger…besides a vegetarian?!

we went a little hard this week with the “who feels like cooking?” mentality. 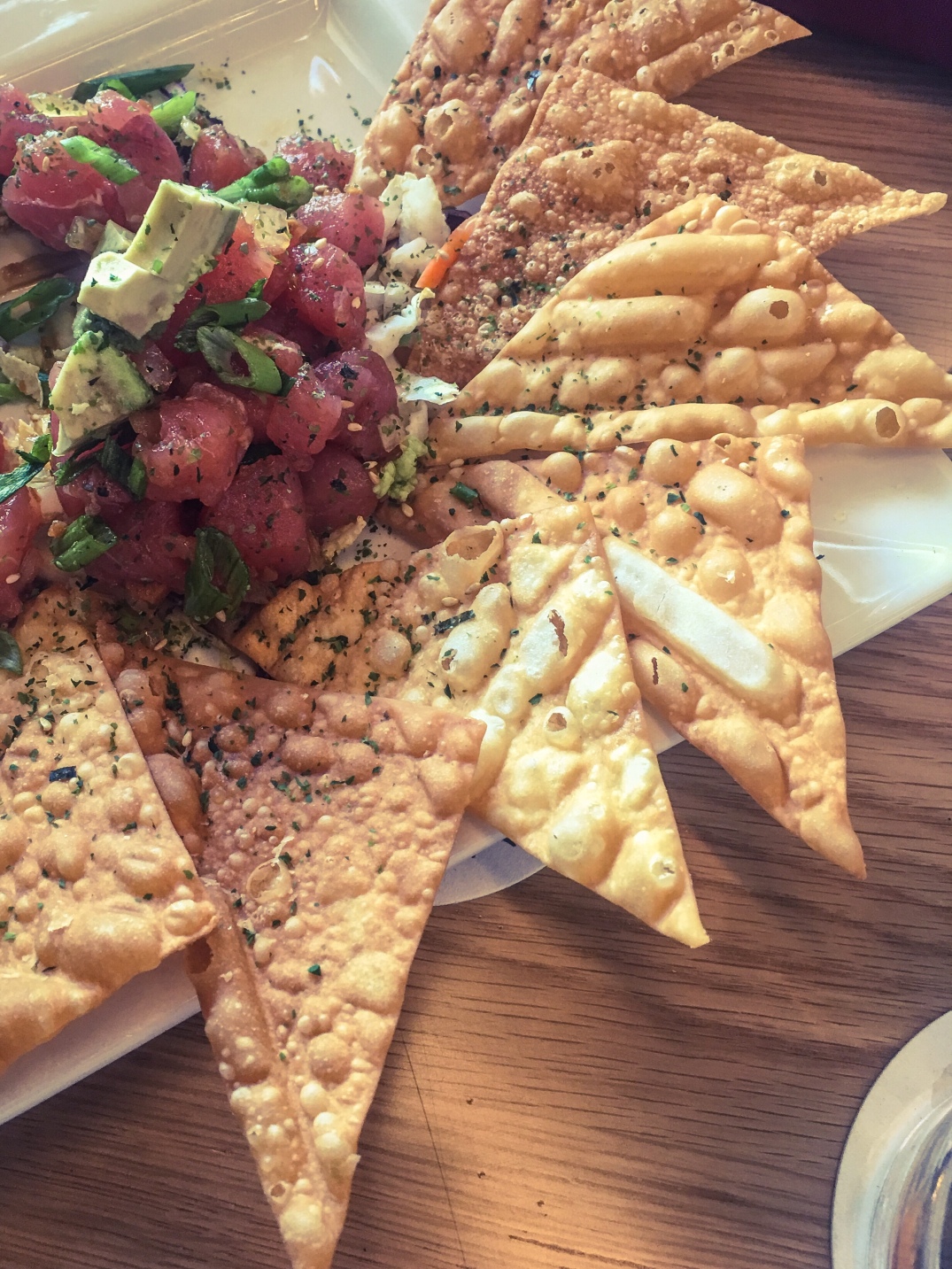 started ourselves off with a deliciously fresh-tasting raw tuna wonton app. the above pile of heaven is courtesy of the brand spankin’ new bj’s brewhouse that just popped up where sears service center used to be at the rhode island mall. my parents told us that you could sign up to give them a ‘test run’ while the staff was in their training period–and get to try the food. FREE food? be right there! we signed up for a lunch date there, and found it to be a fabulous chain. tossed with avocado, scallions, a light slaw & soy sauce–it was an addicting tuna appetizer. 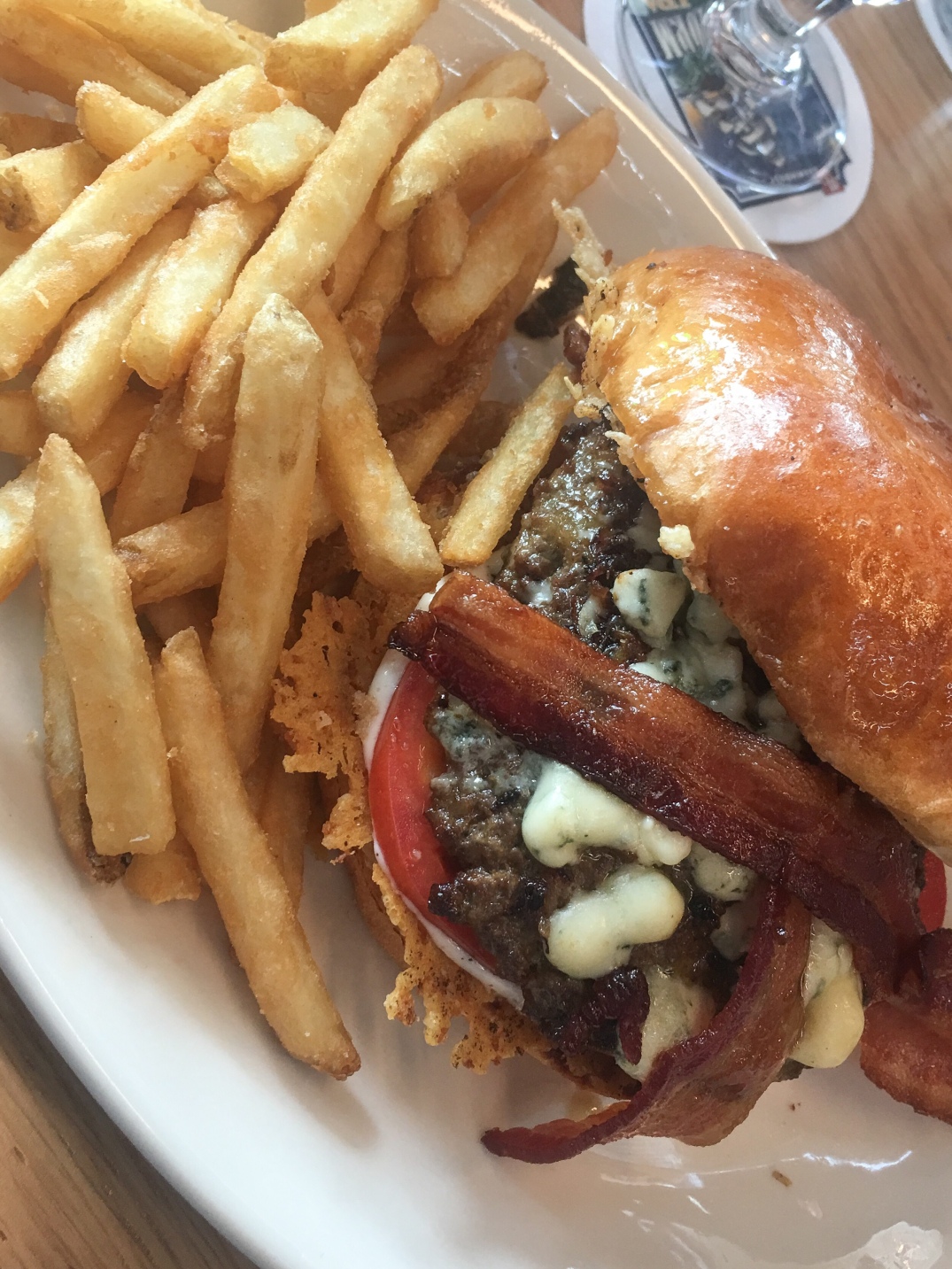 as previously stated, BURGER. that burger you see above, had bacon & bleu cheese on top, with a crunchy layer of fried cheddar. their fries were crunchy and the tomato was sliced at a perfect thickness. there were tons of staff there, and service was great. food was complimentary, but not the booze. CLEARLY, i can’t go somewhere at 12:15 and resist a framboise. #boujie

despite the fact that I continuously order $11 “beer”, my husband still takes me places, and let’s me do me.

we did “splitzies” with the burger and jambalaya. just enough spice, and loaded with shrimp, andouille & chicken-we’d order it again! the concept of their “soft opening” was great, because each table got different pages of the menu –which we’ve heard is as big as cheesecake factory’s– and they politely asked patrons to order different dishes so their kitchen and wait staff could get a hang of it all.

i forget what the heck they called this dessert–but the ice cream scoops were stacked on top of each other before this guy was handed a spoon! literally the gooeist, best baked cookie, brownie-ish deep dish delight! ugh. P.M.S. it’s a super casual, kid friendly restaurant with good prices and tasty plates. can’t wait to re-visit! ollie spilled his entire root beer (which they make in-house) all over the place, and they still liked us. it’s a win. even the big shot almost 3-year-old loved his chicago style pizza!

we’re total suckers for the red meat and brioche bun. we figured, let’s celebrate my 31st on the friday night, and eat healthy. hahahaha, NOPE. have you been to bayberry beer hall? nestled right next to planet fitness in providence–so you can think about that treadmill while polishing off your smashed tiny potatoes that accompany the cow. bayberry is definitely our new spot. since they’ve opened, we’ve gone 6-8 times and each time, LOVED IT. what’s not to love?

BEER. i’m not a beer girl. they’ve got rosé though–and fabulous fruity sours and ciders. this burger looks so simple, yet the craftsmanship is perfection! i took the picture after eating several smashed potatoes, but you get it. they’ve perfected their own ketchup…along with the smoked bacony-whatever-the-hell-sauce-it-was and topped the burger with local cheese and their own smoked tomato roumelade of sorts. clearly, if they’re going that far– the bun was butter grittled. we’re obsessed. The concept is really cool, it’s a german inspired “beer hall”, so you sit at communal tables, order your food up at the counter and get a pager when it’s ready. everything/most things are local to the north east and change constantly. their beers come in small quantities and once they’re gone, they’re gone.

going in reverse order, such is my behavior, we snacked on the beer cheese & r.i. little necks before getting that burger. we found ourselves actually drinking-like pigs at the trough-the ginger/soy/garlic/god knows what else/ sauce …ugh. so good. such awful breath the next day, though. it’s cool, i sweat garlic anyway. 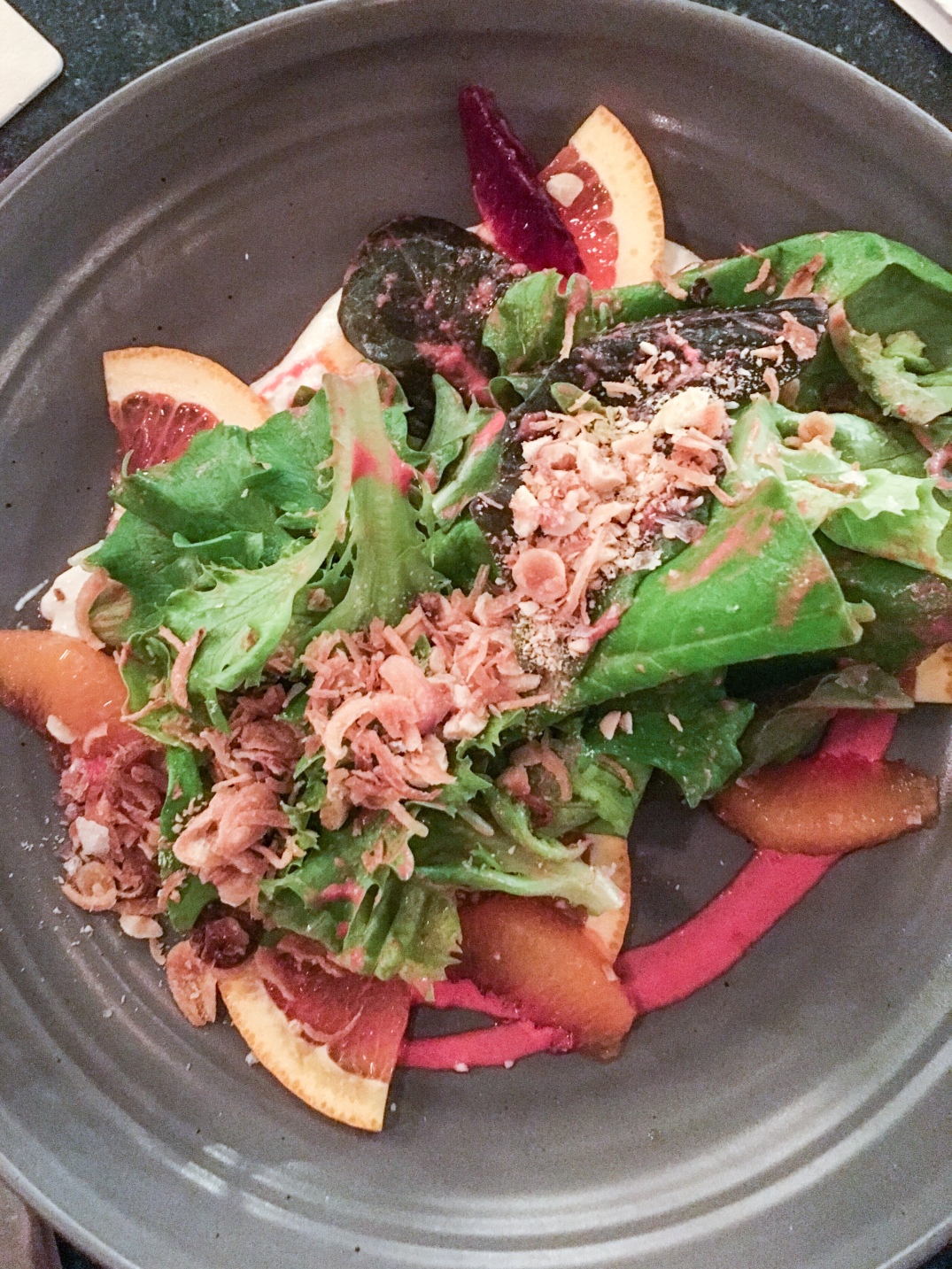 the salad we chose (gotta get the greens in) had local ricotta from a creamery in newport, blood orange and citrus, crispy onions and pistachios atop butter lettuce. like, why? oh- because it’s BOMB. i’m sad I don’t have a picture of that mermaid aqua can of delicious black currant sour “beer” i was drinking along side these plates, because it was really cool. must go back soon and order another. before it’s gone! even cooler, i was their 5k follower and won a $25 gift card. yayyyy me. left there, came here. pastiche.

the over 30 year old yummy pastry shop on the back side of atwells ave. If you’re a rhode islander, i need not explain. you walk in to a heavenly case of ROUGH decision making, and a sweet smell of cappuccino! its the greatest late night spot for the sweet-tooth satisfaction!

i’m a lemon lover. always have been! after teeter tottering back and forth about my choices–because if there were olympic medals for horrendous decision making, i’d take the GOLD-I decided to try the lemon mousse cake. holy hell, I will always and forever order this cake slice. ’til death to us TART. so fluffy and light, without that phony lemon taste. instead, it’s got a buttercream, non-sugary frosting and layers of tart, real lemon mousse. woof. the red stuff? real raspberry tart reduction to DUNK your forkful into. #killinit sorry if this post made you drool. bj’s & bayberry …doin’ good things!