Eat This Tonight! (start cooking it in the afternoon, though!)

Totally try this recipe.  We had it for dinner last night–because the hubby is on the “Paleo” kick.  It was A-MA-ZING!  The most difficult thing was opening cans and pouring in spices–oh–and lifting the big old pork shoulder into the crock pot!  It’s definitely got some heat to it, so ‘preggos’ with “agiata”(…or heartburn as the Americans call it)–BEWARE! 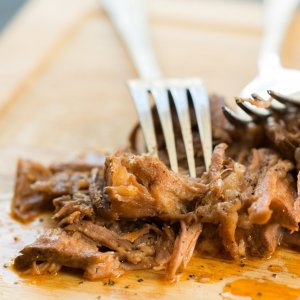 *Minor Tweeks:  We added an additional half of a can of pineapple for some extra sweetness, a couple spoonfuls of pure maple syrup (did you know that pure maple syrup is considered ‘Paleo’?)  and skipped the added cayenne pepper to the dry rub meant for the pork itself.  The “Beasty BBQ” sauce that you boil for an hour had enough spice where we didn’t want to kill our tastebuds–or Penelope’s! The recipe says to cook it on LOW for a million hours…really 8-10, BUT we put our crockpot on HIGH at 1:30pm and were eating it by 7:15pm.  The meat was perfectly tender and shreddable with a fork. IT REALLY DOES LOOK LIKE THE PICTURE–but tastes like heaven.

It wasn’t Barbeque-e, but More like a spicy Carribean-type sauce, which I’d prefer any day over the BBQ.  You could totally put it over rice, grilled veggies, atop a salad or on a bulkie roll–NOT PALEO (shame, shame.)

THE BEST PART WAS LEFTOVERS!  I laid a heaping spoonful (shovel-ful) onto a soft tortilla with some organic mixed greens, sour cream, and peach-mango salsa to create a VERY SPECIAL wrap! Personally, I am FAR from ‘Paleo’–just in case you all were wondering.  Loved it so much that I had it over a fried egg this morning…and maybe for lunch with zucchini. Don’t judge me. I like pork.

2 thoughts on “You had me at crockpot…”